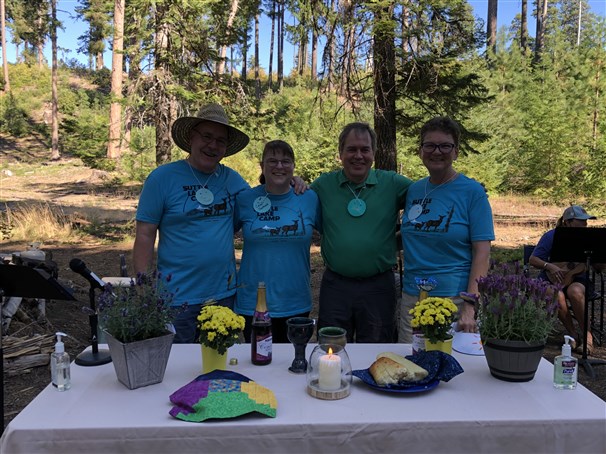 1 Bless the Lord, O my soul.
O Lord my God, you are very great.
You are clothed with honor and majesty,
2   wrapped in light as with a garment.
You stretch out the heavens like a tent,
3   you set the beams of your chambers on the waters,
you make the clouds your chariot,
you ride on the wings of the wind,
4 you make the winds your messengers,
fire and flame your ministers.
5 You set the earth on its foundations,
so that it shall never be shaken.

6 You cover it with the deep as with a garment;
the waters stood above the mountains.
7 At your rebuke they flee;
at the sound of your thunder they take to flight.
8 They rose up to the mountains, ran down to the valleys
to the place that you appointed for them.
9 You set a boundary that they may not pass,
so that they might not again cover the earth.
10 You make springs gush forth in the valleys;
they flow between the hills,
11 giving drink to every wild animal;
the wild asses quench their thirst.
12 By the streams the birds of the air have their habitation;
they sing among the branches.
13 From your lofty abode you water the mountains;
the earth is satisfied with the fruit of your work.
24 O Lord, how manifold are your works!
In wisdom you have made them all;
the earth is full of your creatures.
31 May the glory of the Lord endure for ever;
may the Lord rejoice in his works… (Ps. 104:1-14, 24, 31)

Day seven of our 2022 Creation Speaks curriculum centers on awe and celebration. Using Psalm 104, we hear an interpretation of what the nineteenth century English preacher Charles Spurgeon called “the many voices of nature.” Throughout the 35 verses of this psalm/song, the psalmist is working to understand the wonder that surrounds the formation and growth of life. Long story short, Psalm 104 is known as a hymn of praise, with nature and its creator as its subject.

Day seven’s verses present a lens to see the world, an opportunity to be aware of the awe around you, and to sit in appreciation. There’s a quote from Rumi that states, “If you are not living in awe-- you are not paying attention.” So, in the spirit of this quote and our Creation Speaks curriculum, I took some time to be attentive to nature, chasing things that I wanted to celebrate and that I found full of awe.

A walk along the ocean-lined forest paths on the south side of Camp Magruder is always quiet. Heavy with underbrush, the trail is by no means a secret, but people rarely venture through the outer paths. Yet, the forest has been a certain kind of alive recently, with changes noticeable to the nose first. 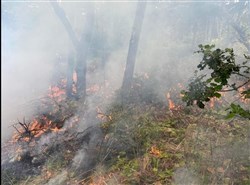 Lines of scorched underbrush snake their way through the forest floor. Much of the burned debris has taken on a blackened orange-red color against the green Shore pines, giving an eerie fall-like illusion to the tree line. Controlled burning consists of setting planned fires to maintain the health of a forest. And fire agencies from around the region did just that this summer, with the completion of approximately 2.8 acres of fire mitigation burns on the Magruder grounds.

I was awe-struck when coming face-to-face with the scorched Earth. My first reaction was one of sadness, as if the forest had been hurt, or damaged. However, a little internet research brought me to an article on the National Park Service website titled, “Indigenous Fire Practices Shape Our Land.”  I learned that fire has been an important part of the culture of this land and its peoples for thousands of years, and that for Indigenous peoples on this continent, “Fire was a tool that promoted ecological diversity and reduced the risk of catastrophic wildfires."

The article quotes Frank Kanawha Lake, described as “a research ecologist with the USDA Forest Service, and a wildland firefighter of Karuk descent.” Lake talks about the concept of cultural burning, which “…links back to the tribal philosophy of fire as a medicine. When you prescribe it, you’re getting the right dose to maintain the abundance of productivity of all ecosystem services to support the ecology in your culture.”

It is this prescription, this careful analysis of the needs of our sacred forest, that speaks to the controlled burns' sacred power. The balance of creation as lifted up in Psalm 104 is on full display with our present burn and regrowth journey at Magruder. In prescribing fire as medicine, our camp was able to harness our spiritual intent with creation.

Soon all the burned brush will be dotted with new salal shoots and huckleberries pushing up to the sunlight.  For now, the scorches simply demand one’s attention, and I sit in both awe and appreciation for the landscape of ash and the healing that is starting to bloom. Someday, on the way to archery or the Giant Swing, campers will ask about it. I hope to tell them about this sacred practice of caring for creation, to turn their eyes to the forest, to notice the new undergrowth, and most especially, to give thanks for the cycle of life and our relationship with the Creator.

Over 120 people attended some part of the Centennial Celebration at Suttle Lake Camp during the Labor Day weekend. Volunteers started arriving on Thursday to make sure that everything was ready for the advent of campers, new and old, to Suttle Lake on Friday.

During the weekend, tours were provided for those who had never been to the site or for those for whom it had been many years since their last visit. There were opportunities to play games, hike, kayak or canoe, swim, and enjoy meeting friends.

There was a history display that included photos and written materials from every decade starting with the 1920’s and going through the 2020’s (well, the first three years of this decade!). It was great to see so many smiling faces from across the century.

We shared meals together, mostly outside, as the weather was nearly perfect for the celebration. The day was very windy on Saturday, which blew the smoke away, cleared the skies, and made for a wonderful afternoon and a clear sky for Sunday.

A worship service was held at the upper campfire circle, with music leadership provided by the Madras UMC music team. There were at least six ukuleles, a couple of guitars, a drummer, and of course the voices of those who were gathered for worship. The service was led by a variety of folks, with the Reverend Todd Bartlett, Executive Director of Camp and Retreat Ministries, preaching. As part of the celebration, we lifted up those who have provided leadership at Suttle Lake Camp over the years.

Directors Jane and Daniel Petke and their staff did a wonderful job of hosting and leading us through the weekend. There were many former staff members present for the celebration, including former directors Rev. Tim Stover and Rev. Lisa Jean Hoefner, who traveled across the country to be present both at the Wallowa Lake and the Suttle Lake anniversary events.

The weekend provided opportunities for us to connect with Creation, revel in community, and celebrate our connection in Christ. We are grateful for the many persons, including those not present with us, whose faithful participation and support have shaped Suttle Lake United Methodist Camp.

Please send your blessings to share in future issues of the e-news. 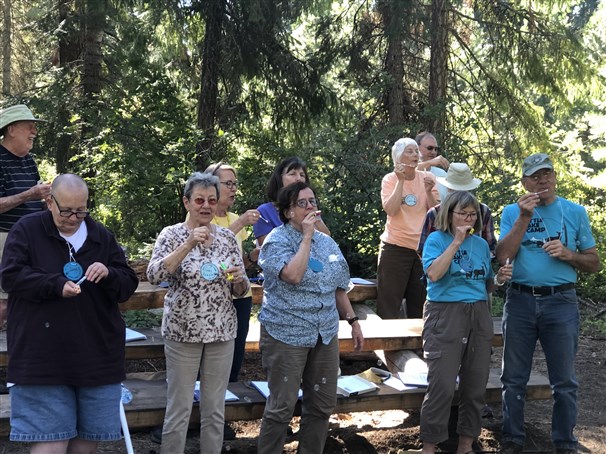 We've had the opportunity to celebrate 100 years of camp and retreat ministry at both Wallowa Lake and Suttle Lake this summer. That's 200 years of transformative ministry (and of course, we have four other sites, as well!). But even this legacy of rejoicing in God's creation pales in comparison with the millennia that Indigenous peoples in the Northwest have been caring for the land and all that thrives here. And then, of course, there's God, the Creator of all the cosmos and all of us. God, whose loving presence has been here since before there was a beginning. Like the psalmist, we raise our voices in wonder and awe at the opportunity to be part of this amazing creation. We invite you to take a moment today (right now!) for intentional gratitude to God and to all those who have been stewards of this creation. We hope that your sense of thanksgiving will extend to camp and retreat ministries; we would love to receive your gift of financial support for the ministry we've done and will continue to do.